I write a monthly emergency preparedness article in the local newspaper (ChevyChase.Patch.com). Here’s the link to my February article. I’ve also copied it below:

Statistics released by the US Secret Service reveal that the majority of active shooter incidents are preventable. Do you know the warning signs?

In 2002, the US Secret Service and the US Department of Education released a report that examined school shootings and attacks from 1974 to 2000 with a focus on “identifying pre-attack behaviors and communications that might be detectable–or “knowable”–and could help in preventing some future attacks.”

In essence, school shooters do not cleanly fit the stereotype many of us have for a school shooter. Many of us assume that most active shooters come from broken families, have poor grades, have a history of suffering from mental illness, secretly develop their plans to attack a school, and lack friends.

In fact, most school shooters come from two-parent families, have good grades (only 5% of violent students receive failing grades), and only a third of school shooters were characterized as “loners”. This means that two-thirds of shooters are have friends and regularly socialize.

Students who plan attacks on their schools are usually not known to have psychiatric issues leading up to the attack. In fact, the Secret Service report explains that “fewer than one-fifth had been diagnosed with mental health or behavior disorder prior to the attack”. 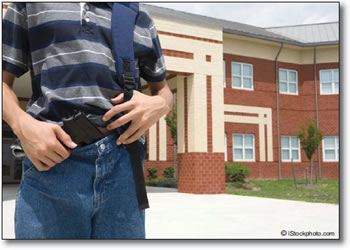 This means that about four-fifths of school attacks could be prevented if students, siblings, and parents called 911 when they hear about a student planning an attack. It seems incredible, but when most people hear about plans for a school attack, they go into denial. They don’t want to be the one who reports a student, they don’t want to cause the student to “get in trouble”, and they simply don’t want to get involved. In one school shooting, 24 students knew about the attack before it took place!

The most important school shooting prevention tip is to immediately report if you suspect or hear of any plans that a student has to attack a school. If you call 911, you can request to remain anonymous.

Although there are six full-time police officers in Montgomery County that serve as “school resource officers”, the SROs oftentimes cover multiple schools at once. Students, parents, or any other concerned party should not wait until they see an SRO to report a planned attack–always immediately call police or tell a school administrator.

Since over 90% of school attackers exhibit warning signs, we must be mindful of potential warning signs. Warning signs developed by the FBI in 2011 include:

Anyone who observes one or more of these signs should immediately report the student to 911 or a school administrator–our only hope of keeping our schools and kids safe is to ensure our community is advised of warning signs and remains actively vigilant.

For more information on how to survive an active shooter incident, please see my previous post in the Chevy Chase Patch about active shooters.

2 thoughts on “Chevy Chase Patch: How to Prevent an Active Shooter”