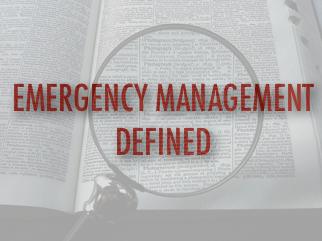 In emergency management, we frequently use the word “event”–and we’re almost always wrong.

It might seem silly, but there is a difference between incidents and events…and it’s often misunderstood or ignored. Below are three examples of the use of the word “event”:

Can you guess which sentence correctly uses the word “event”?

Hint: it has NOTHING to do with a disaster…

To improve understanding, I’ve created the simple graphic below with the NIMS definition and examples of an event: 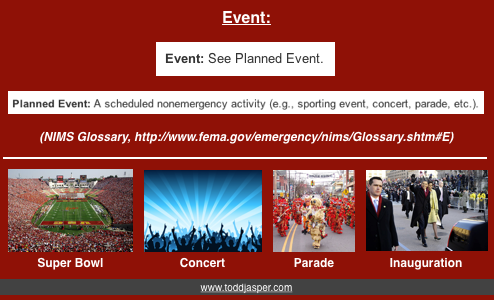 The DHS Lexicon also defines event as: “a planned, non-emergency activity occurring in a particular place during a particular interval of time.” (DHS, Lexicon: Terms and Definitions, October 23, 2007, p. 10).

It turns out that events are scheduled and they are NOT EMERGENCIES. The confusion might stem from emergency managers with military experience since the Department of Defense Dictionary of Military and Related Terms, 2007 defines “catastrophic event” as: “Any natural or man-made incident, including terrorism, which results in extraordinary levels of mass casualties, damage, or disruption severely affecting the population, infrastructure, environment, economy, national morale, and/or government functions.”

While the military definition of a “catastrophic event” quickly defers to the definition of an incident, it still harms our collective competency as emergency managers. As emergency managers, a major part of our job is to improve preparedness/readiness through training and consistent application of best practices. Therefore, if we aren’t using jargon or industry terms properly, we’re doing a disservice to ourselves and our field.

Now, just because an event is planned doesn’t mean it doesn’t require some of the very same resources as an incident. For example, few wildfires receive as many resources as the inauguration of the President of the United States of America. As emergency managers, we spend a lot of time preventing events from turning into incidents (like planning and positioning of resources so that fans from a sports game [event] do not start a riot [an incident]). While events can turn into incidents, incidents really can’t become events.

Hope this was helpful! In a future post, I’ll address what “verbiage” really means…