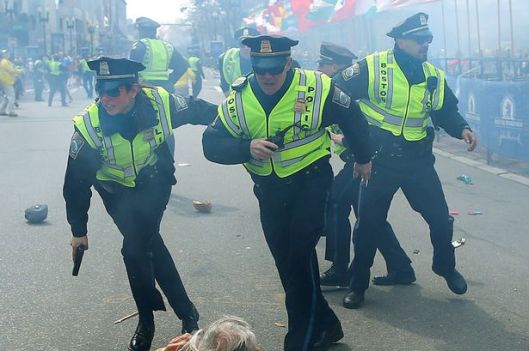 The cowardly bombings near the finish line at the Boston Marathon on Monday were a shock to many of us and a reminder of past bombings on American soil, such as the 1996 Centennial Olympic Park bombing in Atlanta, GA and the May 2010 Times Square  vehicle-borne improvised explosive device (IED).

As social media becomes a standard communications platform, the capacity and capability for first responders to send messages to the public is greatly increased.

Shortly after the IEDs detonated in Boston (at 10:38 in the recording above), an unidentified police commander got on the radio and began giving orders. “We’re going to get the victims out, we’re then going to conduct a sweep with EOD assets… we will then get people out of the restaurants and bars. I need somebody up there to get on social media and let people know what we’re doing here–that we’re sweeping the streets to make sure it’s safe first, and then we’ll get them out of the bars once we get it swept.”

Social media is a communications tool we didn’t have on 9/11 or in Atlanta. From its beginning in March 2006, Twitter has proliferated daily life. Twitter alone transmits about 340 million messages daily–almost 4,000 tweets per second! It is obvious that social media is an excellent way to communicate directly with victims and survivors–especially during notorious incidents in which it is likely that cellphone networks will be overloaded and, thus, unreliable.

This instance should serve as a case study for future incident commanders at recognizing the need to involve survivors and victims in their own outcome. Instantly ordering communications with the public using non-traditional methods (opposed to typically filtering messages from a public information officer) can create calm and assist in developing a common operating picture.

As the emergency management and public safety field continues to better understand and better implement social media, we will continue to see novel uses of instantaneous, two-way communication between public safety agencies and the public. For instance, following the bombings, law enforcement have requested videos and pictures from the public of the area surrounding the explosions. That’s right, we’re actually using crowdsourcing for terrorist investigations.

The citizens and first responders of Boston made our country very proud the other day. As a country and as a field, we mourn the tragedy and the loss of life and the terrible injuries. The men and women of law enforcement, the fire service, emergency medical providers, and all other agencies that ran towards the explosions should feel proud of how they handled themselves–all the rest of us can learn a lot from how well Boston responded under the most perilous of circumstances. Well done.